Here is a partial list of what happens when your horse is missing a vital nutrient:

The majority of problems I encounter are a result of tightened and shortened muscles. My mission is always to find the best way to soften contracted muscles so they can stretch back to a good position. I never do this by pulling on the muscle, but by finding the area of contraction and applying deep pressure to release the tissue of fascia and muscle. With experience I have developed a sense of where a client is being held in tension. The massage consists of me combining my observations with feedback from the client. (Remember: most of my clients don’t talk!). I have to constantly listen to the messages that horses, dogs, pigs, llamas, goats… and sometimes people send to me. No two massages are the same. It takes patience and practice to feel the subtle responses in the body, and to know when to move on to the next area.

From an article by Christa Lesté-Lasserre:

In an ongoing attempt to find easily detectable red flags of over training, researchers have learned that certain hormones wave their colors particularly well. Cortisol, adrenocorticotropic hormone (ACTH), testosterone, leptin, insulin, and other hormones could soon become reliable biomarkers in blood tests to determine if a horse is overworked, according to Concetta Amato, PhD, researcher in the nutrition and endocrinology unit of the French National Veterinary School in Nantes, France.

“Regular, standardized testing of the hormone profile could provide crucial and precocious information about the physiological evolution of the horse’s condition during training, with any changes in that profile being a potential indicator of fatigue and the risk of overtraining,” Amato said during her presentation at the French Equine Research Day held Feb. 28 in Paris.

Amato and her fellow researchers followed 37 Lusitanos and purebred Spanish horses used in public performance shows in France over an 11-month period. They evaluated horses regularly for weight, body condition, and hormone concentrations in the blood via a blood test. Meanwhile, they recorded the horses’ exercise intensity for the period of each evaluation.

In the off-season (October to April) the horses were trained one or two hours a day for four to five days a week and walked or rested the other days. During the show season the horses took part in between nine (April to June) and 19 (July to September) performances per week; horses had no rest days in July or August. During performances horses were required to gallop, sprint, carry vaulters and riders, and execute many abrupt starts and stops, Amato said.

Upon reviewing their results, the researchers found that during the intense exercise period, 49% of the horses lost a significant amount of weight (up to 10%) and body condition score , even though their energy rations (feed) were increased 12%. The team also noted a marked increase in physiologic pathologies—such as infections, musculoskeletal disorders, injuries, and behavior problems—during the show season, which rose from an occurrence rate of 3.5% during off-season training to 47.8% during the high-season performance period.

Amato said the team also saw considerable changes in horses’ hormonal profiles between the off season and the show season:

“Overtraining is one of the major risks of reduced performance capacity in sport horses, with multiple consequences, on both a technical and an economical level,” Amato said. “Previous studies have already shown that overtraining and all its clinical manifestations (behavior problems, loss of appetite, muscular difficulties, variations in the heart rate, etc.) can be linked to perturbations of the hypothalamus (the part of the brain that manages hormone secretion) and to the resulting neurohormonal secretions. Our study confirmed that all the hormones evaluated were significantly influenced by the increasingly heavy workload.”

In the future, Amato said, ACTH, cortisol, testosterone, leptin, IGF1, insulin, thyroxin and prolactin might be reliable biomarkers for evaluating the risk of overtraining in horses. Her research is ongoing.

Hopefully, all massage is relaxing. But deep tissue is meant to work through the layers of the body to lengthen muscle fibers and release areas that are being held tight. A relaxation massage is focused on the pleasure of the recipient. Deep tissue massage should not be painful, but there will definitely be sensations when spasms are being worked on that might not feel totally enjoyable. Hopefully, after deep tissue massage the decrease in pain and tension will bring a feeling of great relief. Posture should improve, and flexibility and movement should be freer.

Deep Tissue Massage targets the structure of the fascia and muscles, referred to as connective tissue. Of the many types of massage, deep tissue focuses on the release of muscle tension and chronic spasms or adhesions.

Sports massage can be relaxing, but it is specifically designed for athletes. Muscles spasms and trigger points are released. Tender areas are identified and worked on before an injury can occur. Range of motion is improved. Mental stress is relieved. Keeping the body balanced and healthy is the best way to avoid sprains or tears.

Serious riders put a lot of stress on their bodies. The position, especially when galloping, is stressful for the neck, back, and shoulders. The neck is in a constant state of tension from holding the head up when in a bent over position. It is important to let the legs share the workload of staying in balance. Even though the weight of the body is totally supported by the horse, the muscles take a lot of shaking and vibration as speed increases.

Massage should be part of a fitness program for riders at all levels, along with diet, rest, and mental preparation. The body is most supple (and therefore less prone to injury) immediately following sports massage, so whenever you can, try to schedule massage close to your competition.

This is adapted from a lecture given by Kristine Urschel, PhD, an assistant professor of equine science at the University of Kentucky:

Forty to 55% of a horse’s mature body weight is comprised of muscle. Muscle itself is comprised of roughly 70% water; 20% protein; and 10% fat, vitamins, and minerals, and has both structural and metabolic functions.

Supplementing with carbohydrates alone is unlikely to increase muscle mass,as is the case with exercise alone. There has been little research in horses, however, there is ample research from human athletes that can be used as a guide for what might be expected in the equine athlete. 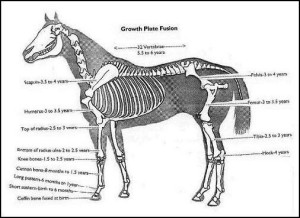 It’s a little hard to see, but this diagram shows how the skeleton of a horse matures.

The withers are comprised of 5 vertebrae, the 3rd through the 7th thoracic. What makes these vertebrae different from the other 50 or so is that they are easy to see and feel. Today I went to work on a pony for the third time. He had severe pain in his long back muscles and lumber area the first session. I released big spasms in the muscle attachments of the longissimus dorsi and gluteus. That pain was gone today, but I wanted to make sure it doesn’t return. I noticed as I watched him being led around that he was not bending at all when walked on a circle to the left.

When a horse travels left on a circle, you should be able to see the withers tip to the right, and vice versa. The withers should feel supple, and the suppleness should be equal in both directions. The pony felt very stiff in his withers, so I worked on releasing spasms and getting a feeling of softness. I ended with a rocking motion which he really enjoyed. Instead of bracing and standing stiffly as he had before, he started swaying and closing his eyes. The vertebrae of the withers should wiggle a bit. If your horse is having a hard time turning in a certain direction, check to see if his withers look stuck. Myofascial release, stress point release, and other massage techniques worked wonders for this little athlete.

My approach is holistic: I want to see the horse, or dog, as a whole, not as a list of problematic symptoms. Treatments can include herbs, cold laser, massage, homeopathy, diet, etc. There is a place for drugs, but there are always side effects that need to be addressed. Natural remedies rebalance the body, allowing the animal or person to heal itself. Using alternative treatments to prevent serious illnesses is a small investment when you consider the cost of conventional veterinary bills. Acupuncture, cold laser, good nutrition, and body balancing supports healthy body functioning. Behavioral problems also can improve greatly when pain is relieved. When the body is balanced, energy and good feelings flow!