There is new hope for headache sufferers that comes from an unlikely source: cold laser therapy.

The treatment uses cold lasers or lower intensity lasers that affect muscles just below the skin’s surface. It’s the same therapy used to heal muscle injuries in athletes, but in this case, focused on areas that cause chronic headaches.

A combination of trigger point massage and cold laser penetrate the skins surface to reach muscles underneath.

The laser generates energy which increases blood flow to the area and stimulates the muscle to heal.

After being treated with the laser, most people find themselves suffering fewer headaches and when they did get one, it typically wasn’t as bad. About 10 percent of patients are completely headache free.

Dr. Richard Hughes, a dentist, says the laser treatment has other applications like helping reduce the pain some people experience from braces and even making it possible to fix some cavities in kids without giving any numbing. 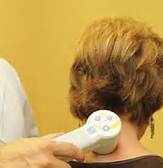 One of the best ways to get a  tight, sore muscle to relax is to first get it to contract more. Most massage techniques are based on this approach. If I push into a muscle that is very tight, painful, and in spasm, I can feel it respond by first getting tighter. If I hold my contact for 30-60 seconds the muscle will start to relax. (You can try this on your own sore shoulder or neck. If you see me at a show, grab me and I will show you.)  Once there is a release from the tension, the muscle will be able to stretch. How much pressure to use is determined by the density of the muscle and the response. Some draft horses require a tremendous amount of pressure, while a lighter thoroughbred will need a very gentle touch.

Great information!! Cinnamon and Honey…! Drug companies won’t like this one getting around. Facts on Honey and Cinnamon: It is found that a mix of honey and cinnamon CURES most diseases. Honey is produced in most of the countries of the world. Scientists of today also note honey as very effective medicine for all kinds of diseases. Honey can be used without side effects which is also a plus.Today’s science says that even though honey is sweet, when it is taken in the right dosage as a medicine, it does not harm even diabetic patients. Researched by western scientists.

HEART DISEASES: Make a paste of honey and cinnamon powder, put it on toast instead of jelly and jam and eat it regularly for breakfast. It reduces the cholesterol and could potentially save one from heart attack. Also, even if you have already had an attack studies show you could be kept miles away from the next attack. Regular use of cinnamon honey strengthens the heart beat. In America and Canada, various nursing homes have treated patients successfully and have found that as one ages the arteries and veins lose their flexibility and get clogged; honey and cinnamon revitalize the arteries and the veins.

ARTHRITIS: Arthritis patients can benefit by taking one cup of hot water with two tablespoons of honey and one small teaspoon of cinnamon powder. When taken daily even chronic arthritis can be cured. In a recent research conducted at the Copenhagen University, it was found that when the doctors treated their patients with a mixture of one tablespoon Honey and half teaspoon Cinnamon powder before breakfast, they found that within a week (out of the 200 people so treated) practically 73 patients were totally relieved of pain — and within a month, most all the patients who could not walk or move around because of arthritis now started walking without pain.

BLADDER INFECTIONS: Take two tablespoons of cinnamon powder and one teaspoon of honey in a glass of lukewarm water and drink it. It destroys the germs in the bladder….who knew?

CHOLESTEROL: Two tablespoons of honey and three teaspoons of Cinnamon Powder mixed in 16 ounces of tea water given to a cholesterol patient was found to reduce the level of cholesterol in the blood by 10 percent within two hours. As mentioned for arthritic patients, when taken three times a day, any chronic cholesterol-could be cured. According to information received in the said Journal, pure honey taken with food daily relieves complaints of cholesterol.

COLDS: Those suffering from common or severe colds should take one tablespoon lukewarm honey with 1/4 spoon cinnamon powder daily for three days. This process will cure most chronic cough, cold, and, clear the sinuses, and it’s delicious too!

END_OF_DOCUMENT_TOKEN_TO_BE_REPLACED

The lymphatic system fights disease bearing organisms. Most people are familiar with the body’s vessel system that carries blood to and from the tissues, but few understand there is another equally vital system of vessels that removes cell wastes, proteins, excess fluid, viruses, and bacteria. The lymph system picks up fluids and waste products from the spaces between the cells and then filters and cleans them.  Massage can influence this lymphatic flow.  Pathways in the lymphatic system drain waste and toxic substances that might cause swelling or other health problems. When toxins build up in cells, and proteins accumulate, tissues fail to regenerate properly and healing becomes compromised. If fluid is blocked, activating fluid movement through massage will improve health.

After a sports injury or surgery, lymph vessels can become overwhelmed with the demand placed on them. Lymphatic massage can help the body remove proteins and waste products from the affected area and reduce the swelling. This helps reduce pressure on cells and allows them to reproduce faster to heal the body. Combining massage with cold laser therapy can have a powerful impact on the body’s ability to heal.

The more chance I have to observe a horse in action, the easier it is for me to identify where the horse might have pain or constrictions. Ideally, I have the time at a show to watch the horse in the ring, but at the very least, I need to see the horse walking away from me, towards me, and walking in a circle in each direction. Seeing the horse standing will also reveal areas of myofascial tightness, postural deviations, and other asymmetries.  Once I see all that, I have to become a detective, putting together all the clues.

The majority of the time, trigger points, stress points, and other restrictions in the body manifest in patterns. For instance, a tight left shoulder might be caused by a tight right biceps femoris (muscles in the hind end). Before I ever put my hands on a horse, I often have an idea (though I also have to keep an open mind!) of what I am going to find.

It has been reported that massaging a horse before competition can result in as much as a 20% increase in the animal’s efficiency. 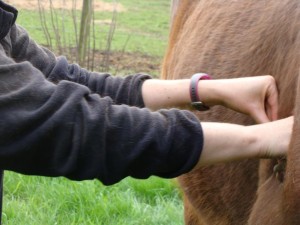 This is a terrific and ground breaking article by Alexandra Beckstett. Finally!:

Kathrin Kienapfel, MA, a doctoral student at Ruhr-University Bochum, in North Rhine-Westphalia, Germany, recently evaluated electromyography (EMG, a tool that allows researchers to read muscle activity through sensors attached to the skin) activity of three major head and neck muscles when horses performed three characteristic HNPs: free, gathered (competition frame with head high, neck flexed, and nose in front of the vertical), and hyperflexed (with the mouth pointing toward the chest, or behind the vertical). She presented her findings at the 9th Annual International Society for Equitation Science, held July 18-20 at the University of Delaware, in Newark.

If you are suffering from ‘bone on bone’ knee pain the pain isn’t directly due to a lack of cartilage in the knee.  (Cartilage doesn’t have any nerve endings therefore there are no nerve fibers to transmit pain. For example, there are a lucky few that have been diagnosed with ‘bone on bone’ and do not have any knee pain.  The only thing they experience is weakness in the knee joint).   Instead, ‘bone on bone knee pain’ is due to the nerve endings in the bone being irritated.  Overactive or irritated nerve fibers are the main reason a patient feels pain.  Many times people will complain of pain and tenderness on the bone itself or in severe cases a patient will complain of a burning or searing type pain.  Either way, cold laser therapy helps eliminate/reduce ‘bone on bone’ knee pain through several different processes.  The following list is just some of the events that occur with cold laser therapy to help decrease knee pain.

Since the rise of modern medicine, the art of touch and palpation have been very much overlooked in the training of health professionals in favor of other “more advanced” diagnostic tests. Palpation of the muscles, tendons, and fascia is a fine art. Touch is extremely effective in determining the extent of a clients’ pain (both animal and human) and in treating and resolving pain.

Through touch I can feel what is a normal, supple muscle and what muscle is tight and constricted. I can feel places where fascia is pulled tight and causing pain and restricted movement. My hands feel the alignment of the spine and places where the skin is cold (restricted circulation). Every horse and dog trains me to be more aware with my hands.

In Japan, the holistic art of Shiatsu (similar to Stress and Trigger Point Therapy) has been practiced for 1500 years to release pain, prevent illness, and increase energy. It is also used to heal specific diseases and treat ailing organs. After World War II General MacArthur attempted to ban holistic practices such as Acupressure and Shiatsu completely in favor of modern allopathic medicine.

A knowledge of skeletal structure, muscle fiber direction, and function of each muscle is essential to put healing touch into practice. Knowledge and training of the hands allows massage therapists to contribute to overall health and athletic success.

Low back pain is probably the most common complaint in the United States. Studies suggest that 4 out of 5 people will suffer from back pain at some point in their lives. Riding, with the frequency of falls, the position, the jarring motion, only hikes up that statistic.

Many people with back pain have been told it is due to a slipped, or herniated disk. Surprisingly however, most back pain is caused by weak muscles, asymmetry, poor posture, and being overweight. Stress and tension can also contribute to back pain.

In Chinese medicine back pain is believed to be caused by a block in the bladder meridian. Acupressure, reflexology, shiatsu,and acupuncture can be very effective for curing pain. Yoga has many postures (like side plank) that can strengthen postural muscles. Swimming is good exercise, as it supports body weight while strengthening important core muscles.

Muscle is living tissue, requiring fuel, oxygen, temperature regulation, and waste removal. Muscles are constantly rebuilding and restructuring, responding to hard work, rest, standing, and walking. On any given day, I will find a different horse from the one I saw a week ago.

Muscles that are responsible for movement have long, elastic fibers. They act as levers to move the bone where they insert.

The muscles that are responsible for maintaining posture tend to have short, strong muscle fibers. Some of these muscles wind around joints to provide support.

Each equine discipline differs in what it requires from the muscles. A pony pulling a cart will need different adjustments to one going in a side saddle. The dressage horse will experience different muscle soreness from a racehorse. When working with a horse I also need to take into account what kind of footing it is ridden on, and whether some asymmetries might be caused by a rider hanging on a rein or sitting crookedly.