The shape of the neck is what is most visibly affected by riding the horse deep and rolled in since it is used as a tool for bending up the heavy back and/or off-setting the horse’s balance. The neck is very agile and most horses can bite their own chest, flank or rump if they make an effort. The vertebrae in the neck do not have the spinous processes that do those of the chest and back. and they work a bit like a chain, being very mobile in most directions. The muscles attach directly onto the vertebral bodies.

The spinal column of the neck does not follow the contour of the neck as seen from the outside. Rather, it is S-shaped inside the flesh of the neck. At the base of the neck the column comes out quite low. Then the spine bends upwards to be located near the top of the neck at the poll. It is natural for the horse to have this curvature of the spine of the neck, and though the curvature varies slightly from horse to horse it is basically the same. It can, however be changed through training or lack thereof.

Generally you can say that a horse showing a lot of underneck has a lower set base of the neck, spine-wise. It usually also has generous muscle bulk on the underside, but the two go hand in hand. If the horse has weak muscles supporting the base of the neck from above, it sags. The muscles from withers to poll take over, and the under neck stabilizes and stops the bulging bottom from protruding too much.

The greater bow of the S-curve at the bottom makes the neck shorten. In dressage there is much attention paid to the “arching” of the neck. But this is not an arch that one would want to increase, rather the opposite. The vertebral column of the neck should rather straighten than curve – the telescoping neck. It is the outside of the neck that arches in appearance. The bottom curve of the vertebral column lifts and straightens, the top part stays about the same, and between the very top vertebra and the skull, full relaxation of the muscles lets the head fall into place. The muscles around and in front of the withers help lifting the base of the neck, while they in their turn are aided by an active back.

In this way the shape of the neck is a good indication of how well the horse uses his back. The aim is to have the horse do this “topline stretch” both over the back and over the neck.

If you want to teach a horse to lift the base of the neck, straighten the vertebral column, lift the back and so on, the easiest and most productive way to do this is to ride the horse with a tendency for forward-down-out movement of the head and neck originating in stepping actively under with the hindlegs.

Now, I wrote tendency. It does not mean that the young horse should be ridden with his nose at the ground grubbing like a hog. No, a tendency for forward-down-out. The horse shall seek to stretch out but not actually do so. Rather contact the bit and stay there. The mere tendency makes this mechanism of lifting the base of the neck work. To begin with, there’s little, but the stronger and more well trained the horse gets, the better the effect. The topline muscles of the neck work at their medium length, and the muscles at the underside are disengaged. The head falls relaxed from the 1st vertebra and needs no fixing by muscles, but simply hangs by it’s own weight.

In 2000, Dr Vet Horst Weiler concluded his studies on illnesses in and around the attachments of tendons and ligaments in horses. In his studies, he found that 80% of horses used for dressage and jumping had injuries around the attachment of the nuchal cord on the head. Horses used for hacking, trotters, ponies, coldbloods, had these injuries much less or not at all. The injuries consisted of bony build-up on the site of the insertion at the back of the skull, bony nodules inside the ligament, mineralization of the ligament, etc. These are all the result of excessive stress and inflammation, because the body tries to reinforce an area threatened by rupture.

In an article in Dutch magazine Bit in 2003 Het Knikje – Overbelasting van de nekpees, Weiler’s answer to the question of what causes the overloading comes as rather a shock for dressage riders – It occurs when the horse makes the highly sought flexion in the poll in dressage training. Overbending, riding deep and round, or with the chin almost on the chest or behind the perpendicular is the cause of the problems, according to him.

These particular types of injuries are caused by a pulling,  torquing, or twisting stress on the ligament insertions. Now, remember that all horses graze, and they do it with their noses “on the ground”. But non-dressage/jumper horses had normal x-rays and skulls. Those horses graze too, so just stretching the head down is apparently not harmful. The sheering action on the ligament probably happens as the riders impose extreme poll flexion, curl their horses noses into the chest, and work them there repeatedly, for lengthy periods of time, or pull hard while doing so. 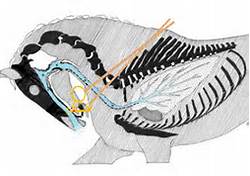