Recently, a solid little client of mine, who has never been injured or lame, had a very tough trailer ride in bad weather, and was slightly off as a result. When I went to work on him, his entire right side, especially the hind end, was tight and sore. It took about 5 minutes for him to feel some relief, and in 40 minutes he marched out of the cross ties with a purpose (he was hungry) and spring in his step. After a snack he was tacked up and ridden and his forward march continued throughout the ride. He continues to stay sound.

Three days later I went to work on another horse that had gone to the same show in the same storm. He is 4 hands taller than the first one, but had the same soreness on the right side of his body. It took about 40 minutes for me to release all the spasms and sore spots. I suggested to both owners that canter to the left would help stretch out the right side of the horse. Interestingly enough, the owner of the second horse turned her horse out in the pasture after a few carrot stretches. He rolled, jumped up, and cantered a few circles to the left, before disappearing with his herd over the hill. A very happy sight! 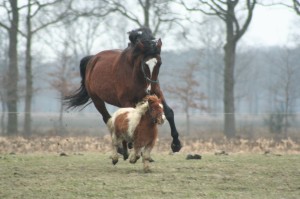