Horse owners might spend hours improving their horse’s gaits and behavior under saddle with training exercises, but there is still much that we don’t know about the finer points of a horse’s gait. That knowledge gap has made it difficult to analyze the true effectiveness of certain exercises that are a common part of many riders’ routines.

Michigan State University researchers recently conducted a pair of studies to analyze and compare the way a horse’s legs and joints move during the “swing” phase when the leg is carried forward through the air and the “stance” phase when the hoof is grounded and the leg is bearing weight, both over level ground and over poles.

“Therapists use hoof-eye coordination exercises to rehabilitate horses after neurological diseases,” said Clayton. “These include walking and trotting over, around, or between poles or other obstacles. The challenge for the horse is to see the objects, plan where to put his feet, then use neuromotor control to place the feet correctly.”

Although the practice is tried-and-true for rehabilitation, scientists didn’t know how well or why it works, so they set out to study the specifics. Researchers attached markers to different points on horses’ legs and measured the heights and angles of the joints as the horses trotted over flat ground, over low poles, and over high poles. A series of force plates recorded the weight on each of the horse’s legs as they moved through the series of poles.

When horses trotted over the poles, they cleared the poles using increased flexion in all of their limb joints, rather than pushing their whole bodies higher off the ground.
Since horses weren’t pushing their bodies higher in the air to clear poles, the vertical force between the hoof and the ground did not increase, indicating that there was no increase in weight-bearing when horses trotted over poles—a point that might have been considered problematic for horses overcoming some injuries.
Based on the measured angles and forces, it is unlikely that the leg’s soft tissues are stressed more when horses trot over poles versus trotting over flat ground.

Like humans, horses learn about the experience of moving their body over an obstacle like a pole.

“During the first few times trotting over the poles, horses tend to exaggerate their response so they lift their hooves higher than is necessary,” Clayton explained. “As they practice, they learn that they don’t have to exert as much effort and that a lower hoof trajectory is adequate.”

That reduced effort doesn’t mean the exercise loses its benefits over time, however: The amount of flexion the joints undergo is still substantially greater over poles as compared to flat work, so the exercise helps increase joints’ range of motion, especially in horses that are recuperating from lameness, Clayton said.

Clayton recommended trotting over poles as a good therapy for horses being rehabilitated from physical injuries after their movement has become symmetrical at the trot.

She cautioned, however, that the study was performed in horses that were sound at the trot, and the effects of trotting over poles in unsound horses have not been studied. Therefore, do not begin pole work until your veterinarian confirms that the horse has returned to a satisfactory soundness level.

Additionally, although her study did not touch on how the work impacts older horses, Clayton said it would make sense that the exercise’s mental and physical benefits could be good for seniors if they are sound. 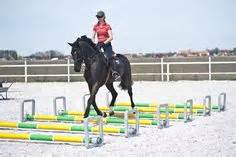