Recently I was called to work on a jumper that was having trouble with lead changes.  When I encounter problems with leads, there are a few spots that I check: triceps in the front leg, the illiacus by the pelvis, the glutes. But those places yielded no clues with this gelding.  I did find a lot of tightness in the muscles of his neck, particularly the brachiocephalicus (the blue muscle in the diagram). 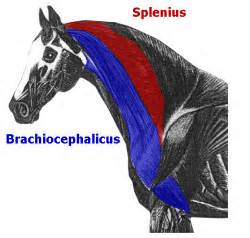 The horse flinched when I started work on this muscle on both sides of his neck and seemed to have a lot of trouble moving his head to either side.  I asked if the horse was having trouble riding turns and circles, and the owner confirmed that corners had been quite problematic of late.

The brachiocephalicus swings the head and neck from side to side, and also pulls the front leg forward, as it also attaches there. You can see what a long muscle it is. Carrot stretches were almost impossible for this horse. He was literally trapped by the spasms in his neck. I used all the tools in my hands: compression, direct pressure, cross fiber friction, and the horse closed his eyes and starting taking deep breaths. There was great improvement in his flexibility. The rider has reported improvement in his performance in every way: turning, jumping, lead changes, and length of stride.  If your horse is having similar problems, don’t overlook the influence of the brachiocephalicus. 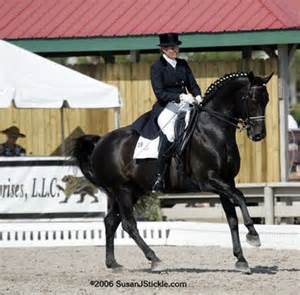 This is a terrific and ground breaking article by Alexandra Beckstett. Finally!:

Kathrin Kienapfel, MA, a doctoral student at Ruhr-University Bochum, in North Rhine-Westphalia, Germany, recently evaluated electromyography (EMG, a tool that allows researchers to read muscle activity through sensors attached to the skin) activity of three major head and neck muscles when horses performed three characteristic HNPs: free, gathered (competition frame with head high, neck flexed, and nose in front of the vertical), and hyperflexed (with the mouth pointing toward the chest, or behind the vertical). She presented her findings at the 9th Annual International Society for Equitation Science, held July 18-20 at the University of Delaware, in Newark.