This is an edited excerpt from a book I’ve been reading called The Wild Medicine Solution: Healing with Aromatic, Bitter, and Tonic Plants, by Guido Mase.

“The science behind Astragalus is remarkable. Modern research is validating the uses detailed for this plant. Studies link it to improved immunity and reduced anemia when it comes to chronic infection, cancer, kidney disease, and more. It is a tonic that builds our resistance to all manner of ills, including  pathogens. Recovery from protracted illness or long term stress is another of its strengths. I have found this plant to be useful support for those undergoing difficult courses of chemotherapy.

Those who take plants like Echinacea in the fall should switch to Astragalus instead. It’s a much more appropriate immune tonic and much more effective at keeping illness at bay. While its life-giving power is legendary in conditions of extreme depletion, such as cancer, compromised immunity, or recovery from prolonged infection, everyone would do well to take some Astragalus root every day. For those who get frequent colds, or whose respiratory tracts seem to be congested and weak all winter, this herb is just the ticket. Astragalus will improve overall immunity. 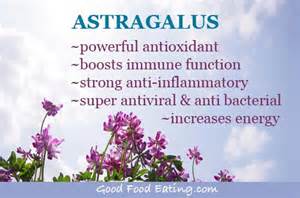 Corticosteroids can be life saving. That was the case with me and severe asthma. Steroids are anti-inflammatory; they decrease pain, swelling, and relieve itching. The problem is that what should have been a very short term treatment turned into 14 years, until I was introduced to Transfer Factor which I have often written about on this blog.  When treating our dogs, horses, cats, and ourselves, it is imperative to be informed.

The negative side effects of corticosteroids are the reason they should be used as briefly, and in as low doses as possible. They decrease the ability of wounds to heal. They increase the chance of infection.They can contribute to destruction of joints by decreasing collagen. They suppress the immune system.  They increase appetite and thirst. In cats, an increase in diabetes has been seen.  Steroid use can also upset laboratory tests, causing misdiagnosis of other problems.

A holistic approach to replacing toxic steroids will include nutrition, omega fatty acids, antioxidants, Vitamins such as C, A, E, glucosamine, MSM, yucca, bromelain,and so many more. These approaches are safe and non-toxic.  You will save money on drugs and vet bills. 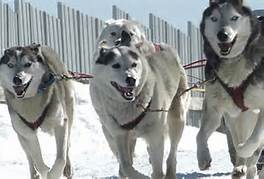 The body is a complex network of muscle, soft tissue, and nerves that communicate with each other. Creating positive change in the external surface of the body has long been used to positively influence the internal organs. A disruption, injury, or imbalance in the soft tissue can lead to imbalance in other parts of the body.

Every body experiences injury to the muscles, bones, and fascia (connective tissue) during a lifetime. In severe cases, medication may be necessary to treat extreme pain, but in many cases, the body can be stimulated to heal itself. Body work can improve circulation and lymph flow, allowing the tissues to recover from injury. Massage helps immune cells fight inflammation and infection. Decreasing stress through massage can improve health in many ways.

There is no one system of massage or body work that I automatically use on every animal. Healing has to occur on many levels, including diet and nutrition, cold laser therapy, acupressure, myofascial release, and different types of massage. It is my challenge and inspiration to explore each individual and it’s needs.

Once you have gotten past the acute stages of healing an injury, applying heat can be both soothing and healing. But did you know the best source of heat comes from the body itself? The body will create heat when massage is administered. This heat from within the body will separate muscle fibers that are stuck together and increase circulation to the injured area.

Using heat and massage for chronic conditions before participating in activities will help prevent re-injury. The cold laser is another method of increasing circulation to a healing injury.

Do not use heat treatments after activity, and do not use heat after an acute injury or if an infection is present.  At that time, ice is preferable, keeping tissues in a state of “suspended animation.” 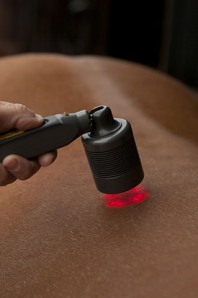 During World War ll, before penicillin became widely available, Russian medics applied raw garlic to the infected wounds of their soldiers. The English military began referring to garlic as “Russian penicillin.” As recently as 2009, the war department in Moldova, a small country in eastern Europe, issued a daily ration of one onion and several cloves of garlic to each member of its army to protect them from the flu.

All these uses and more are now backed by medical science. One milligram of allicin, the main active ingredient in garlic, is equivalent to 15 international units of penicillin. Each garlic clove has from 7 to 13 mg. of allicin, so 3 cloves contain the same antibacterial activity as a standard dose of penicillin.

In one important respect, garlic has the edge on penicillin. Common bacteria are 1,000 times more likely to become resistant to modern antibiotics than to garlic. Garlic appears to satisfy all of the criteria for antibacterial agents, and it is cheap and safe, with no toxic side effects.

Eating more garlic may be one of the best natural remedies against cancer. According to a Canadian study: “Garlic was by far the strongest inhibitor of tumor cell growth. Garlic blocked 100% of the growth of human cancers of the stomach, pancreas, breast, prostate, lungs, kidneys, and brain.

From Eating on the Wild Side by Jo Robinson

A transfer factor is a protein molecule that is taken from a human or animal that has already developed protection (immunity) against a certain disease. (Look in I Recommend box on right to order. The only company to order from is 4Life. They hold the patent. I can vouch for them. Any other company that claims to sell Transfer Factor is not to be trusted.)

Transfer factors are used for infectious conditions in people with weak immune systems. These infectious conditions include bacteria or viruses in the blood stream (septicemia), sinus infections, bronchitis, influenza, swine flu, the common cold, shingles, chickenpox, hepatitis B, fungal infections such as coccidioidomycosis, yeast infections (candidiasis), parasitic infections such as leishmaniasis and cryptosporidiosis, and leprosy. Transfer factors are also used against infections caused by viruses such as cytomegalovirus (CMV) and Epstein-Barr virus; by bacteria such as Mycobacterium tuberculosis, Mycobacterium fortuitum, and Mycobacterium avium; and by yeast-like fungus such as Cryptococcus and Pneumocystis carinii.

The initial results of a groundbreaking independent study using Transfer Factor™ and Transfer Factor Plus™ yielded unprecedented results in a study done by the Institute of Longevity Medicine in California, a laboratory recognized for its research and expertise in measuring the ability of ingredients to significantly boost the immune system. Dr See had showed that Transfer Factor Plus™ increased the NK cell activity 248% above normal immune response without supplementation, or about five times higher than any of the other 196 previously tested products. This is higher than any other drug, vitamin, herb, etc.

In the follow up research, twenty patients, 12 men and 8 women, were selected for this in vivo study.  The average age was 49.3.  The twenty individuals were each level 3 or level 4 cancer patients.  Each patient was basically sent home by his or her oncologist to die.  The average life expectancy was 3.7 months.  The protocol was to place each patient on 9 capsules per day of Transfer Factor Plus.  The patients were given a number of other general nutrients*.  After eight months, 16 of these individuals were still living.

Dr. Joe Raemakers, DVM – “We recently had an experience with a 30-year-old horse who had a leg swollen from infection. I applied transfer factors directly to the leg and within 6 days the swelling was totally gone. I checked his lymphocyte level and he had a 27% increase since the use of transfer factors. THAT’S JUST PHENOMENAL!”

Rob Robertson, M.D. – “Nearly everything that goes wrong with us and our pets, with the exception of trauma – i.e. broken bones, etc., can be traced directly to an immune system failure”. Pollution, drug overload and nutrient-poor diets compromise our immune health. The key to self-healing is a strong defense system, which protects dogs and cats from everything from the flu germs to cancer cells. More than their mainstream counterparts, holistic veterinarians believe that a weak immune system plays a key role in causing disease. Drugs aren’t the answer for immune enhancement. The immune system is not responsive to drugs for healing. Antibiotics fight infection, but they don’t affect whatever weakened the immune system in the first place. This is why holistic veterinarians focus less on things that cause diseases and more on those that affect the body’s defenses.

Acupuncture and Cold Laser Therapy work on the same principles, so how do you decide which treatment to choose? One of the advantages of acupuncture is that several areas can be treated at the same time, while the laser can only work on one point at a time. If your horse or dog is afraid of needles, especially around the head or a difficult spot, lasers can be easily used.

Horses have very strong muscles, and can actually twitch a needle right out. In that case, the laser works better.

Infection is a possible complication with any needle. There is no danger of that with the laser.

It is rare, but needles can break off if an animal moves suddenly. Again, there is no chance of that problem with the cold laser.

Acupuncture and laser therapy are both effective healing therapies. I hope this information will help you in choosing the right one for your animal.

Antibiotic resistance is rapidly becoming an issue in the equine world, a new white paper has warned.

It warns that tighter controls could be imposed on medicines in a bid to prevent antibiotic resistance. Such controls could ultimately mean certain antibiotics would no longer be available for use in horses.

To slow the development and spread of multi-drug resistant bacteria, it is imperative that all parties involved practice the careful use of antibiotics, according to the paper produced by the American Association of Equine Practitioners’ Equine Research Coordination Group.

The group, comprised of organizations and researchers that support equine research, is chaired by New Zealand-born equine orthopedic specialist Dr Wayne McIlwraith, who is based at Colorado State University.

Antimicrobial resistance is a type of drug resistance whereby bacteria are able to survive exposure to an antibiotic.

It is inherent to the use of antimicrobials, according to Dr Harold McKenzie III, who is associate professor of medicine at Virginia Tech’s Marion duPont Scott Equine Medical Center.

“Any time antimicrobials are used, there is an inherent selection process whereby the bacteria exposed to the antibiotic will be inhibited or die, but a few bacteria will likely survive,” he said.

“Ultimately, if this process continues, only resistant bacteria remain.”

Due to the frequent use of antimicrobials in humans and animals some bacteria are becoming resistant to many antibiotics, a situation known as multi-drug resistance (MDR). END_OF_DOCUMENT_TOKEN_TO_BE_REPLACED

Chemotherapy weakens the immune system. Patients undergoing cancer treatment can take Transfer Factor to protect the body from the infections which often occur.

Dr. Duane Townsend, author of “A Maverick of Medicine” and a gynecologic oncologist, puts all his cancer patients on transfer factor to boost their immune systems. Patients report fewer negative side effects from chemotherapy. In Japan and China, transfer factor supplementation is also used after surgery to help prevent the recurrence of cancer.