Probably the biggest problem I observe is riders demanding a “frame” from their horse within moments of mounting. Using hands to force the head and neck into a fixed shape causes damage that is difficult to reverse.  Without a good period of time that allows the horse to stretch, warm up muscles, and find their balance under the rider, muscles and fascia tend to get stuck into adhesions.

Superficial fascia is the connective tissue that is found beneath the skin. This tissue links and covers blood vessels, nerves, muscles, and bones. The fascia and muscle combine to form the mysofascial system. Adhesions limit muscle movement which interferes with performance.  Adhesions can also cause severe pain, reduced flexibility, and tender trigger points.

To release adhesions, I use a technique called ‘myofascial release.’ This technique involves applying gentle but sustained pressure on the soft tissue. During this technique, it is also important to target the fascia. This helps to lengthen and soften the fascia and break up the adhesions and any scar tissue that is present between the bones, muscles, and skin. Scientific evidence shows that myofascial release offers relief from different types of joint and muscle pains. Flexibility and movement is then restored. 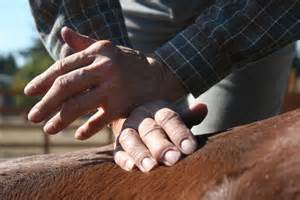 Trigger points are tight spots within the muscle (not at the ends or attachments as in stress points) that cause pain, sensitivity, tingling, burning, or weakness.  Trigger point therapy causes the muscle to have a twitch response, which resets and relaxes the muscle. This can be uncomfortable for a moment, but the results are worth it. Reduction or elimination of pain and improved range of motion can be seen and felt immediately.

Another way to release trigger points is through myofascial release. Fascia is connective tissue that surrounds the muscles, blood vessels, and nerves. Fascia has multiple functions. It holds some structures together, providing stability.  It allows others to glide and move freely.

Trigger points can be caused by scar tissue, strain from repetitive movement, bad posture, poor nutrition, or injury. The most effective way to remove trigger points is through manual pressure. When the trigger point is released, the fascia will once again move smoothly over the muscle, pain will be reduced or eliminated, and range of motion will be increased.

When there is pain, it is safe to assume that there is something wrong in the function of tissues. Those tissues could be in muscle, ligament, tendons, nerves, or cartilage.

Every tissue in your body is made of very small cells. An injured tissue is merely cells not working, and struggling to recover.  Light at specific frequencies can stimulate the cells to function better. That is the beauty of low level or cold laser therapy. The light energy from the laser gives a jump (just like jumper cables to your car battery) to cells.  Treatment time can be measured in minutes.  There are no side effects. And best of all patients, whether two or four legged, get relief because their injured tissues are restored. There is no chemical masking of the pain with a drug.

The laser can speed the healing of sprains and strains, tendinitis, wounds ,and other chronic conditions that are stubborn to respond to any other therapy. 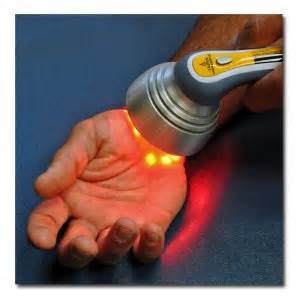 Low Level Laser Therapy, also known as Cold Laser Therapy, has been in use for over 40 years, but was finally approved by the FDA in 2002. Laser therapy has primarily been used to relieve pain, heal wounds and scar tissue, and regenerate nerves.

There are over 2000 published studies on the cold laser showing absolutely 0% negative side effects. What drug can show the same results?

Cells in the body produce a chemical known as ATP (adenosine tri-phosphate) to run the body and heal tissue. All of our body’s activities result from the use of ATP.  Low Level Laser Therapy stimulates a structure within the cells called the mitochondria to produce slightly higher amounts of ATP. With more ATP at the cell level, tissues heal faster, and relief comes faster.

Four to twelve treatments may be needed for complete healing of an injury or relief of pain, but I have found major relief after just one session with the laser. 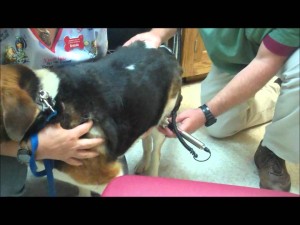 Muscles that are short and tight can squeeze nerves. Nerves within a muscle can be compressed to the point that they send distorted signals: numbness, sensitivity, swelling,and burning sensations can be the result.

An occasional cause of severe lameness is radial nerve paralysis. The radial nerve is damaged by being overstretched. This condition is common in draft horses, due to their front end conformation. Carriage horses working on web streets also are in danger of this injury. Young horses, racing and playing in wet fields will sometimes do sliding stops when running full tilt into a fence or other obstacle. It is this kind of movement that can overextend the leg and damage the radial nerve.

Keeping your horse fit and balanced is the best insurance for avoiding injuries and problems of the nervous and muscular system. Structural integration has been shown, in both humans and animals, to improve functions of the nervous system.

“Event horses are very fit and sharp enough to run for their lives. Minor disobedience and keenness should not be punished too severely….Distractions such as close proximity to the show jumping and cross country should also be taken into account. If a horse is presented showing good training and way of going and does cope with the environment then it should be rewarded with very high marks.”

I was recently at an event where the dressage arenas (and the warm up areas)  are right next to the start box on the cross country course. So many of the most fit horses looked on the brink of explosion during their tests.

Cold lasers are not just effective for injuries. They can also be used for relaxation. Lasers are often used at the race track to calm young thoroughbreds before a race. There are three spots on the head where the cold laser should be applied:

_Just below the ears

I was inspired to write about the zygomatic nerves by a photo and article that circulated on FB and other media sites recently.

There is a muscle that starts at the corner of the horses mouth and runs up to the masseter (cheek). That junction is full of sensitive nerve endings that I often use stress point therapy on. When there is stress here the jaw will be stiff and tense. When the noseband and flash of a bridle are tight and applying pressure, a sensitive horse will be miserable. How often do you see a horse who is tossing his head, or trying to open his mouth, only to have bridle buckles tightened a notch?

If I massage a horse and it seems that every tight place has been released and the body is balanced, but the horse still doesn’t seem quite right, I check the head carefully. Because if your head (and we are no different!) doesn’t feel good, nothing feels good! You can help your horse by making sure the bridle is not squeezing anywhere. 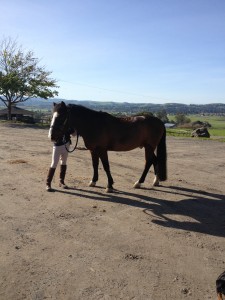