Most pain relates to muscles and joints. Muscles and joints bear the strain when bodies are overused, misused, and unbalanced. Body balance also affects circulation, digestion, and the nervous system.

The muscles and skeleton is the largest energy user of the body. When the body is under strain, the result is fatigue, pain, and reduced athletic performance.

I see my job as a massage therapist as that of a body educator. There is nothing that makes me happier than to see previously uncomfortable and suffering animals able to enjoy their jobs with a bright look on their face. 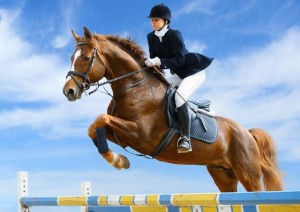 Yesterday I went to a work on a half draft/warmblood cross that has been having some lameness issues in his front legs. I had the owner walk him for me, and walking away he looked quite good. But when she walked him toward me I saw he was almost crossing his front legs when he walked.

I got to work and found several tight spots on the right side (the side of the inflamed joint) of his body. I focused on aligning the entire structure of his body.  I have found that the only way to have long lasting results is to make sure all the soft tissue is supple, the nutrition program is of the highest quality, the exercise program is balanced, and the saddle fits.

After an hour of rolfing, I had the owner walk him out again. This time his front legs were about 9 inches apart, but still not square under his shoulders. Sometimes stopping is the hardest part of my job. The horse was happy and relaxed and I stopped working on him rather than go too far and irritate him. The vet will be out soon to assess what we need to do next. 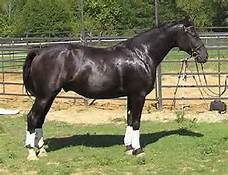 The horse should be identical on both sides of his body. Such a simple concept, but so difficult to achieve! In order to be a successful, healthy, injury and pain free animal, the horse must have equal capacity on each side of the body for muscle contraction and extension.

Horses have a genius for compensation. As many of you have experienced when trying to reach a diagnosis, horses can mask a problem in the most inventive ways! Evaluation of asymmetries is one of my first jobs when I work on a horse.

After working on a very lopsided horse, I often suggest that the rider see a rolfer so the rider is as centered as possible and not contributing to the muscle imbalance in the horse.

Given the complexity of their movement and their musculo/skeletal construction, horses have much to gain from massage therapy. Horses are athletes and, like us, can develop sore muscles, stiff joints, and restricted range of motion. If massage is practiced on a regular basis it can help alleviate these symptoms and, more importantly, help prevent injury.

Today I step aside from writing to quote Ida Rolf, the creator of Structural Integration. She was born in 1896. Interestingly, her father was a civil engineer who built docks and piers on the east coast. Rolf developed her system of body balancing in the 1920’s:

“For too many of us, willful ignorance of our own processes keeps us in the dark. This ignorance has been compounded by many factors, not the least of which is a teaching called by the misnomer ‘physical education.’ The assumption in most Phys.Ed. school departments is that endless ‘doing’ – calisthenics, acrobatics, violent sports, gymnastics – builds good bodies. The ideal, they think, is the body beautiful of the newsstand magazines. A modicum of truth baits this trap and makes it attractive. It is clear that heavy, repetitious exercise, by bringing blood and fluid to muscles, does cause them to enlarge and, up to a point, improves their functioning. After this point, however, the body becomes rigid and muscle-bound.

“Structural Integration underscores the need for patterned order in the body. It is a physical method for producing better functioning by aligning units of the body. ”