Do you know where the most common sites of damage to a horses’ back are? The answer is:

Here is the typical scenario: your horse has acute back pain, so you give him some time off. The horse recovers from the pain. During the time off, if it is more than a week or so, the muscles of the back start to atrophy. You put the saddle back on to put the horse back to work. The fit, which was probably questionable to start with, is now worse. And the cycle of pain is again triggered.

Having regular body work done on your horse can help prevent the sad story above. Stress points and trigger points can often appear (and be taken care of) under my finger tips before obvious pain shows up in riding. Back muscles can be stiff and tight long before the horse starts to complain with refusals, bucking, or choppy movement. Massage and chiropractic treatments are as important to your horses’ well-being as good nutrition, training, and shoeing. 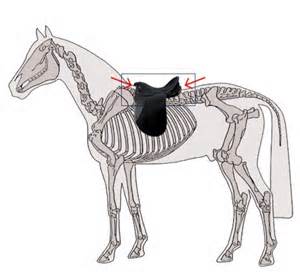 With or without exercise, different areas of the body tend to get tight. Just as you ensure your truck and trailer are well maintained in order to run smoothly and lower the probability of a possible breakdown, the same philosophy must be applied to your horse.

The amount of stress and fatigue that a horse experiences at a horse show (both in travel to and from, and competing) is astronomical. Without proper maintenance, these points of stress and soreness can turn into chronic injuries. 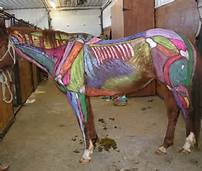 Myofascial release and sports massage can give you a horse that will be able to perform for the long haul, but can also help create a more well-balanced horse mentally and emotionally. When the body is balanced and pain free, the horse has more confidence going into the ring or start box.  Horses are sensitive creatures, and often when they seem to react violently for no reason, are doing so because of some pain in their tissues.

Through observing a horse’s gait, how they stand, how they move, etc., a massage therapist can determine what needs to be treated.  If a horse reacts when a saddle is being put on, or favors one lead more than the other, it is a sign that something is out of alignment. When total balance is achieved, the horse’s health and well-being becomes the norm and you will once again have a happy animal that is eager to do its job.

Clayton first introduced the cutting-edge equipment researchers use to measure force and pressure distribution on a horse’s back: a wireless, electronic saddle pressure mat with Bluetooth transmitter. Each of this device’s 256 sensors is capable of 60 readings a second—that adds up to a whopping 15,360 force and pressure measurements per second.

“Force is exerted between two objects in contact and causes a change in movement, direction of movement, or shape,” Clayton explained. The pressure mat only registers the force component applied perpendicular to its surface.

For instance, “At trot the horse and rider are airborne in the suspension phase, then the rider descends into the saddle in the stance phases (when a diagonal pair of hooves are in contact with the ground),” she said. “Total force increases and reaches a maximum as the horse starts to push up into the next suspension and the saddle pushes against the rider’s seat to provide an upward thrust. Maximal total force is approximately twice the rider’s weight in trot and three times the rider’s weight in canter.”

END_OF_DOCUMENT_TOKEN_TO_BE_REPLACED

Even when there is no apparent pain, I often find trigger points in muscles. When pressed the horse does show that there is soreness. These tender points are bands of tight tissue within the muscle. When left untreated, pain will eventually show up away from the area of tight tissue.

An example of trigger point pain in people is a headache. When there are trigger points in the neck and trapezius muscles, a tension headache is a common result.

Trigger points are formed by chronic overload of a muscle, and can then cause secondary points to form as a result (sort of satellite trigger points).  Other causes are arthritis in joints, fatigue, and trauma. Poor posture can put enough stress on muscles to create trigger points.

In people, carrying a heavy purse or briefcase on the same side all the time can cause enough muscle overload to cause trigger points to form. In horses, I suggest that people alternate the side they mount and dismount on to avoid trigger points in the serratus, long back, rhomboid, trapezius,and posterior pectoral muscles.

Sometimes the answer to this question will be obvious: your horse is recovering from an injury, or is stiff from a long haul (just the way people are when they get off a plane.)

There will be times when the answer is not as straightforward, but ask yourself if your horse is moving as brilliantly and freely as he could. If your horse has a very active show schedule, you can be certain that sports massage will make the job easier. If your horse is carrying you and a saddle, pulling a cart, getting hit occasionally by a bit in the mouth, then consider helping him deal with these rather unnatural situations by the restorative powers of Stress Point Therapy, Trigger Point Therapy, Myofascial Release, Cold Laser, and all the other tools to help heal the equine athlete.

After you ride and remove the saddle from your horse, take a few minutes to groom that area. The pressure from your weight and the saddle restricts circulation, no matter how light you are, or how well the saddle fits. Currying the area under the saddle pad will prevent sweat glands from getting blocked and forming bumps.

Riders almost always mount from the left side. This drags down the left shoulder and thoracic vertebrae, which will cause the muscles to weaken there. It also seems that there is some machismo involved with being flexible enough to mount from the ground. While impressive, this is not doing your horse any good.

Try to alternate which side you mount on daily. Your horse and his back will stay much healthier. If your mounting block is tall enough, you don’t even need to use a stirrup. Just swing a leg over and drop softly into the saddle. I remember working at a former Olympian’s barn in the 90’s and the mounting block was so tall (to mount the huge warmbloods boarded there) that it was virtually like a staircase. Mounting never involved pulling down on the saddle. You mounted from above.

Use one like this to save your horse’s back:

So much better on the horse’s back: